At least seven people are known to have died in a magnitude 6.4 earthquake that struck central Croatia on Tuesday.

Rescue teams spent the night scouring the rubble of damaged buildings in the search for survivors.

A 12-year-old girl was killed in Petrinja, the prime minister said as he visited the town.

Five people died in the nearby town of Glina, his deputy said. A seventh victim was found in the rubble of a church in Zazina, state media reports.

Petrinja's mayor said that about half the town had been destroyed and people had been pulled from the rubble.

Many were too afraid to return to their homes overnight in case aftershocks caused more damage, officials said. Some people slept in their cars or stayed with relatives in other areas. About 200 people sheltered in a military barracks.

EU crisis management chief Janez Lenarcic is due to visit Petrinja on Wednesday. 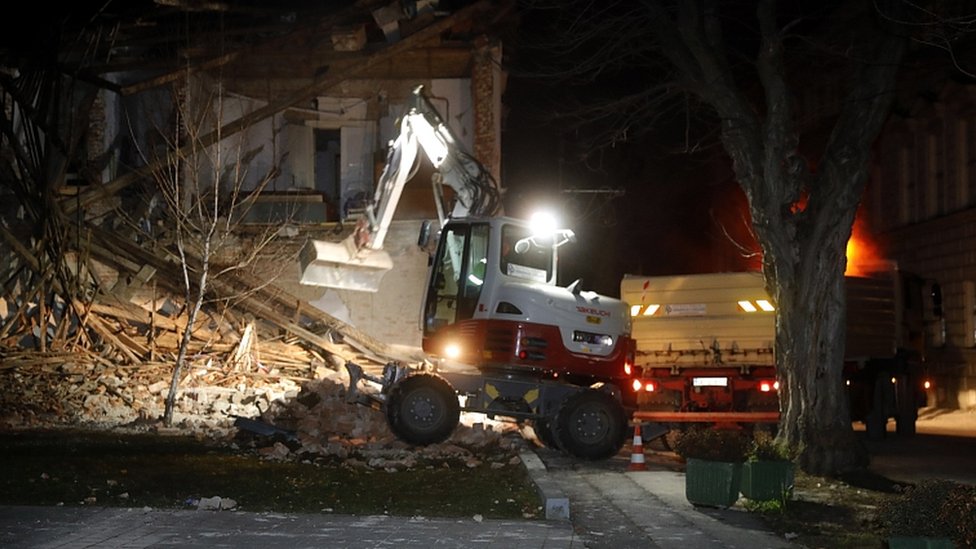 The earthquake was felt in the Croatian capital Zagreb, in neighbouring Bosnia and Serbia, and as far away as Italy.

One woman was pulled alive from the rubble of the town hall in Petrinja on Tuesday, Croatian media reported. 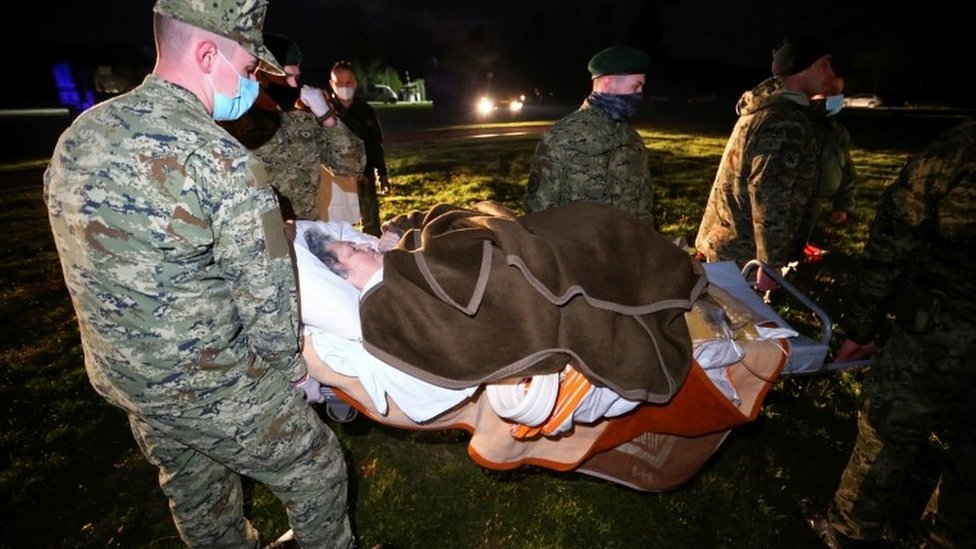 image captionSome of the injured were evacuated to Zagreb

"We are pulling people from the cars, we don't know if we have dead or injured," Darinko Dumbovic, the mayor of Petrinja, told regional broadcaster N1 on Tuesday. "There is general panic, people are looking for their loved ones."

The mayor was speaking to reporters when Petrinja, home to 20,000 people, was hit by another, weaker, tremor.

"All the tiles in the bathroom are broken, all the dishes fell out," one resident, 72-year-old Marica Pavlovic, told AFP news agency. "Even if we wanted to, we can't go back in, there is no electricity."

People were also injured in the nearby town of Sisak. National broadcaster HRT said the local hospital there was struggling to cope with the number of casualties arriving for treatment. 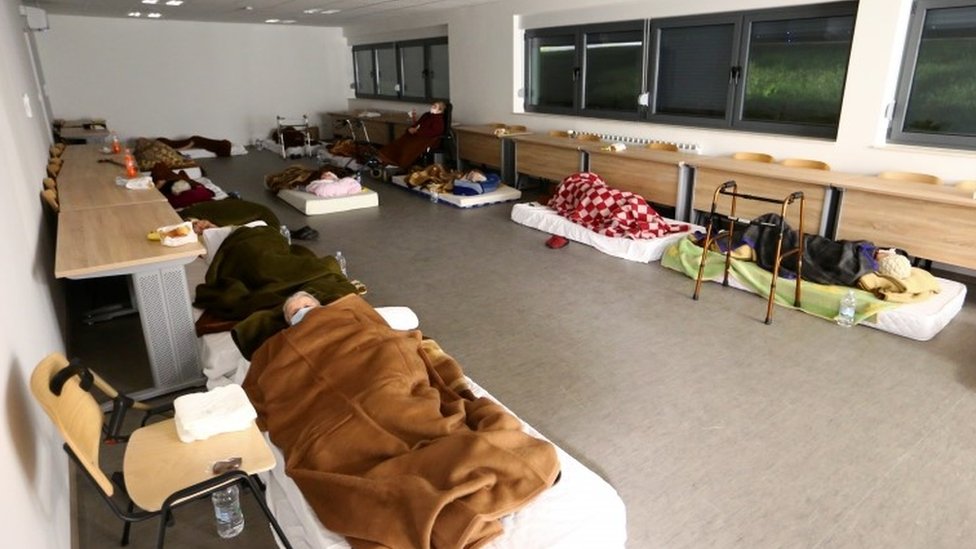 Tomislav Fabijanic, head of emergency medical services in Sisak, said they were seeing fractures and concussions, and some people had needed surgery.

The GFZ German Research Centre for Geosciences reported that the earthquake struck at 11:19 GMT at a depth of 10km (6 miles). The second tremor followed an hour or so later.

The Croatian Mountain Rescue Service said that rescuers from across Croatia had travelled to Petrinja to help with the search and recovery effort.

Our colleagues from Croatian Red Cross are on the ground assisting at the epicentre of the #earthquake at #Petrinja #croatia @crvenikriz_hr pic.twitter.com/tEJ58O8eab

Prime Minister Andrej Plenkovic, who rushed to Petrinja, said: "The army is here to help. We will have to move some people from Petrinja because it is unsafe to be here," he added.

Croatia's president and prime minister saw for themselves the scale of damage in Petrinja within two hours of the earthquake and were united in their response.

President Zoran Milanovic compared the scene to Grozny, the capital of the the Russian republic of Chechnya, which was largely destroyed during a siege 20 years ago. The prime minister said it was "clear as day" that Petrinja was no longer safe for human habitation. 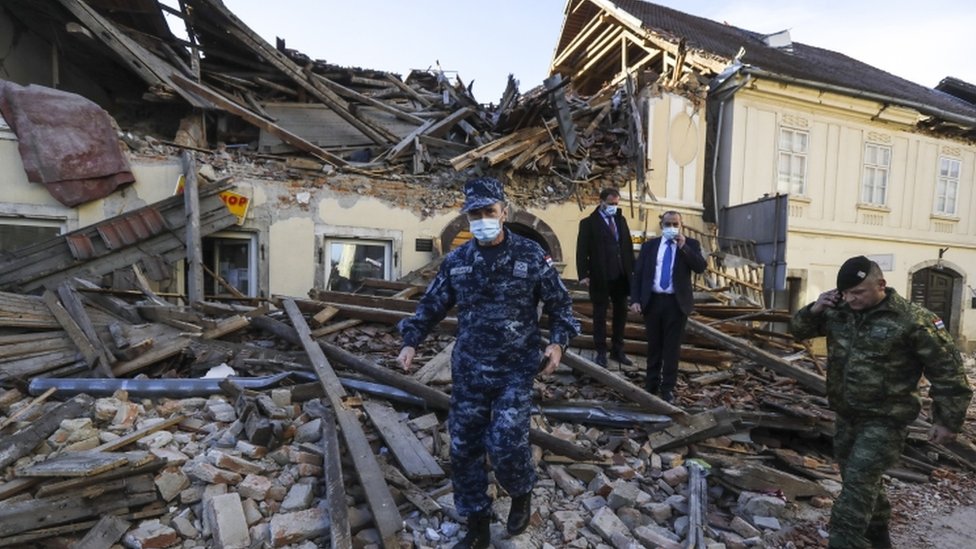 image captionPetrinja is home to some 20,000 residents and the prime minister said it was now unsafe to live in

It is a bitter blow for the town's people, who faced a significant rebuilding operation after Croatia's war of independence in the 1990s. More recently, they have been tackling economic devastation, with the decline of traditional industries.

Croatia's leaders have promised funds for reconstruction. But Petrinja's residents will be seeing in the new year in temporary accommodation - with little prospect of an early return home. 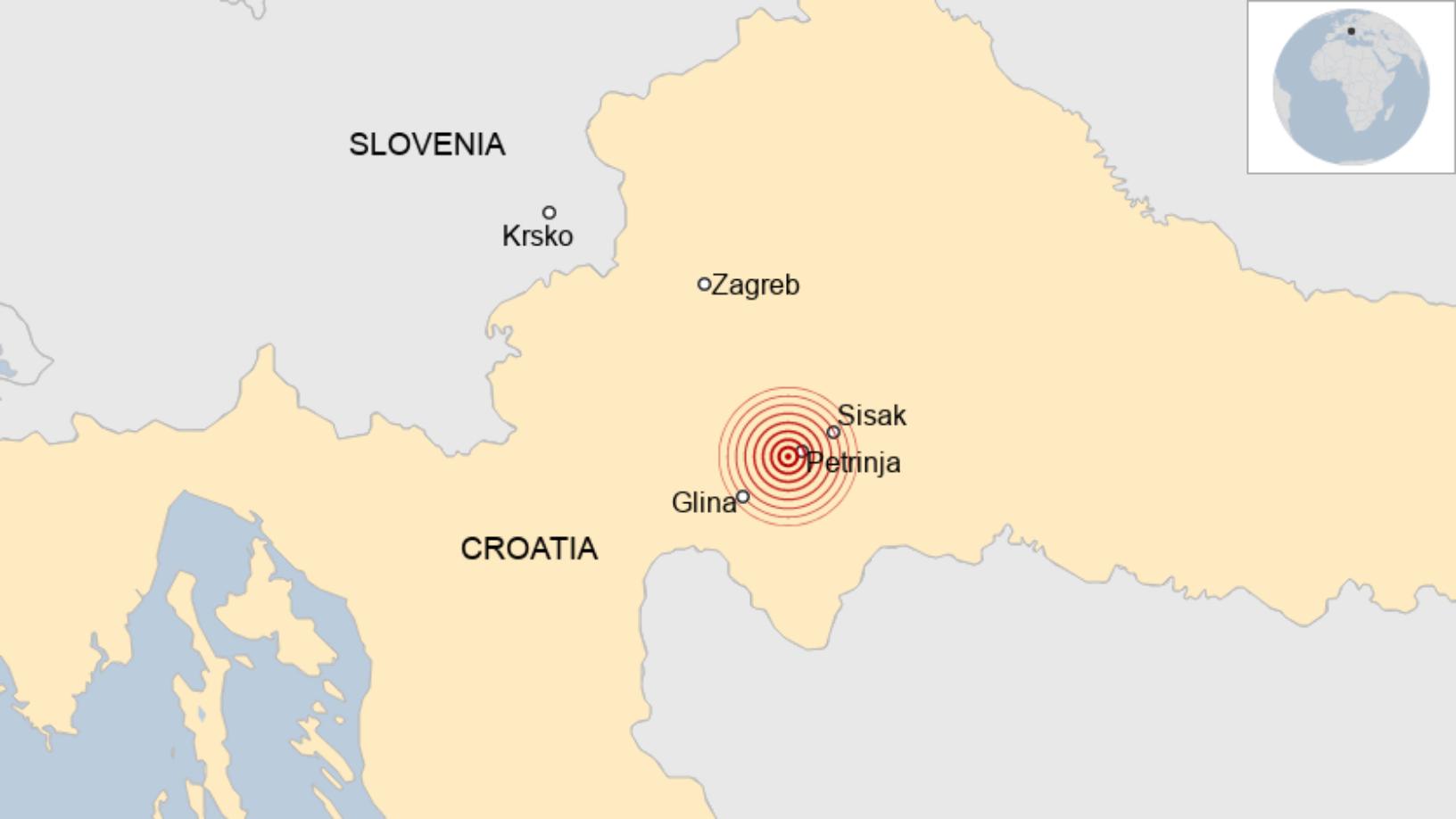 A kindergarten also collapsed in Petrinja, but it was empty at the time of the quake. In a village just outside Petrinja, a worker told N1 that nine of its 10 houses were destroyed.

Slovenia has moved to close the Krsko nuclear power plant it co-owns with Croatia.

The US Geological Survey said it was the largest earthquake to occur in Croatia since the introduction of modern seismic instrumentation. An earthquake of similar size occurred in 1880 near Zagreb.

A magnitude 5.2 earthquake hit central Croatia on Monday and there are fears of more.

Branko Dragicevic of the Serbian seismological institute told the BBC: "We can expect further quakes."

Pakistan to Get Help from China in Improving Agric..

Pakistan to Get Help from China in Improving Agric..