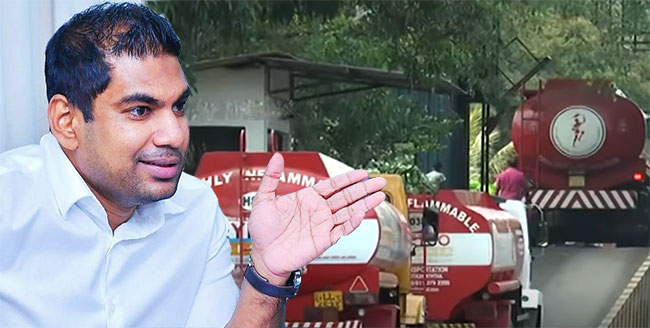 Minister of Power and Energy Kanchan Wijesekera today announced that several new guidelines have been implemented for the transportation of fuel in the country.

In a twitter message, the minister said that a decision has been taken to increase the capacity of fuel transportation via train to rural depots from 40% to 100%.

Meanwhile it has also been decided to expedite the license issuing process for fuel distribution and reduce the duration of the process from one month to one week.

He also said a separate line will be established for the collection bowsers of fuel station owners.

A decision has been taken to cancel the operating license of transporters who fail to report to duty in the next two days and to take legal action and cancel the license of individuals who prevent others from reporting to duty.

It has also been decided to increase the capacity and the number of government-owned fuel bowsers to operate daily and to conduct 24-hour operations to deliver fuel from terminal to meet the requirement.

These new guidelines come in the wake of the decision taken by the Ceylon Petroleum Private Tanker Owners’ Association to withdraw from fuel transportation activities from midnight yesterday (April 30), demanding an increase in their tariffs.

This had severely affected fuel distribution operations in the country while the distribution of fuel from the Muthurajawela terminal had come to a complete halt today with some tanker owners even deciding to detach and leave behind their bowser trailers at the terminal.

The strike action had led to the temporary closure of several fuel stations in the country owing to a lack of fuel supplies.

The union warns that say they will continue their strike action if the government does not take steps to increase their transport charges in line with the unusually high fuel prices as well as the increase in spare parts prices by around 300%.

However, taking to twitter last night, the Energy Minister said alternative methods are in place to continue the fuel distribution without interruption if private bowser owners withdraw from services.

The minister added that the Ceylon Petroleum Storage Terminals Limited (CPSTL) has been instructed to open registration immediately for new suppliers to transport fuel and to cancel the registration of those who fail to report for duty.

Trains, government-owned, fuel station-owned and privately-hired bowsers that are not on strike will continue the fuel distribution services, he added.

In response to this, the Joint Secretary of the Ceylon Petroleum Private Tanker Owners’ Association Mr. Shantha Silva said he believes that the minister has been misled by the officials as it takes at least 06 months to obtain a license and put fuel bowsers into operation.

However, in another tweet issued today the minister announced the following new guidelines for fuel transportation.

(a) Increase the capacity of the train fuel transportation from 40% to 100% to the rural depots.

(b) Expedite the new license issuing process to 1 week from 1 month.

(d) Cancel operating license of transporters who fail to report to duty in the next 2 days and to take legal action and cancel license of individuals who prevent others that report to work.

(e) Increase the capacity and number of Government owned bowsers to operate daily.

(f) 24-hour Operations to be conducted to deliver fuel from the terminals to meet the requirements.

Child dies after being attacked by stray dog in Ma..

Child dies after being attacked by stray dog in Ma..

Will Shah Rukh Khan play a double role of father a..