China's Chang'e-5 mission has returned to Earth with the cargo of rock and "soil" it picked up off the Moon.

It's more than 40 years since the American Apollo and Soviet Luna missions brought their samples home.

The new specimens should provide fresh insight on the geology and early history of Earth's satellite.

For China, the successful completion of the Chang'e-5 venture will also be seen as another demonstration of the nation's increasing capability in space.

Recovery teams were quick to move in on the returned capsule. It was first spotted by helicopters using infrared cameras. Support staff following up in SUVs planted a Chinese flag in the snow-covered grassland next to the module. 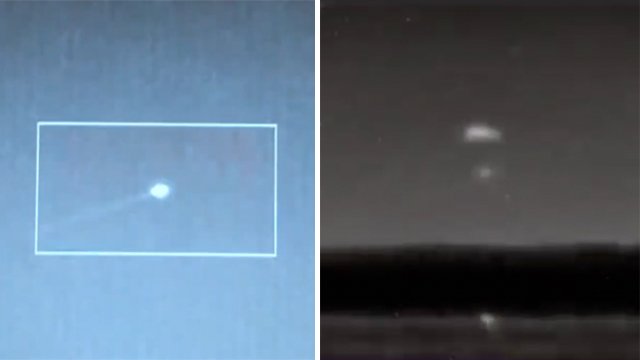 The Chang'e-5 venture was launched at the end of November.

A probe comprising several elements was sent into orbit around the Moon. These elements then separated, with one half going down to the lunar surface.

The lander system used a scoop and a drill to dig up samples. It's not clear how much, but possibly in the range of 2-4kg.

An ascent vehicle subsequently carried the materials back into lunar orbit where they were transferred to an Earth-return module. This was shepherded home by a fourth element and released just before it had to make the fiery descent through Earth's atmosphere. 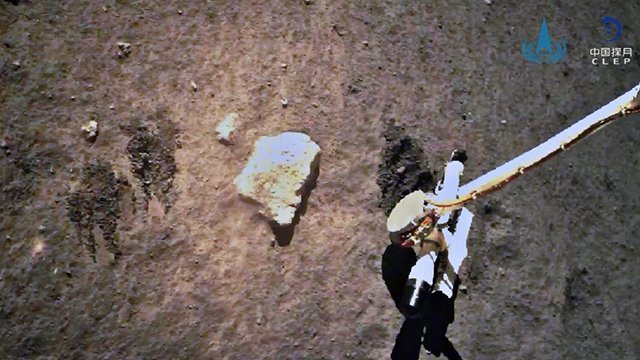 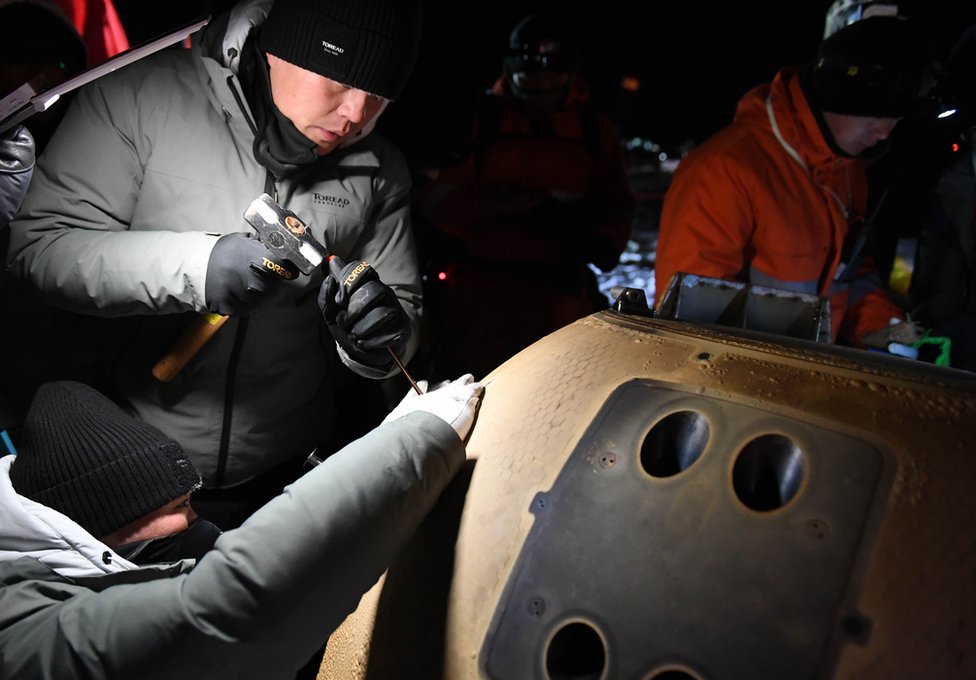 image captionThe capsule's contents will be removed in a dedicated laboratory

Returning from the Moon, the Chang'e-5 module would have been moving much faster than, say, a capsule coming back from the International Space Station.

Engineers had chosen to scrub some of this extra energy by doing an initial "skip" in the atmosphere. This saw the module briefly dip into the gases that shroud our planet, before then plunging much deeper to try to reach Earth's surface.

The Chang'e-5 capsule was targeted to float down on parachute to Siziwang Banner in Inner Mongolia. This is the same location used to bring Chinese astronauts home.

Again, infrared cameras were on hand to follow the action by detecting the heat of the module. 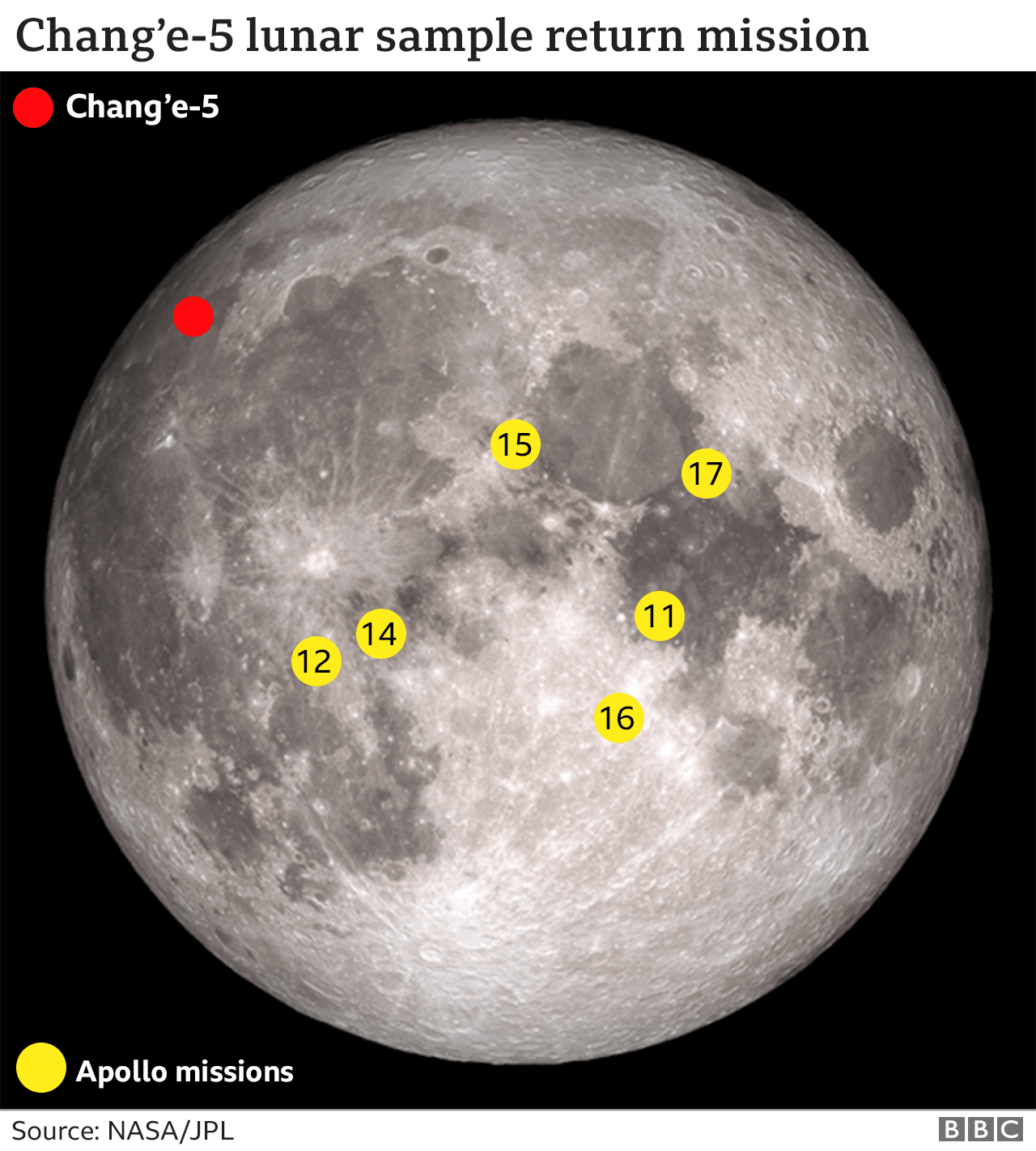 A total of just under 400kg of lunar surface materials were collected by American Apollo astronauts and the Soviets' robotic Luna landers.

But all these samples were very old - more than three billion years in age. Chang'e-5's rock and dust should be quite different.

The Chinese mission targeted a high volcanic region called Mons Rümker in the northwest of the nearside of the Moon.

Samples from this terrain may be no more than 1.2 or 1.3 billion years old, and, as such, should provide additional information on how the Moon is constructed internally.

The samples will also allow scientists to more precisely calibrate the "chronometer" they use to age surfaces on the inner Solar System planets.

This is done by counting craters (the more craters, the older the surface), but it depends on having some definitive dating at a number of locations, and the Apollo and Soviet samples were key to this.

The Moon is once again in vogue. America is planning on returning astronauts to the surface in the middle of this decade. A series of robotic spacecraft will land ahead of these human explorers to do reconnaissance.

Some of these probes will be from national space agencies; some will be sent by commercial enterprises - including from the UK.

Tony Azzarelli, director and co-founder of the UK industry space body Access Space Alliance, said exciting times lay ahead, and highlighted the start-up Spacebit's quest to put a rover on the lunar surface next year.

"It'll be the first time that a legged robot will walk on another celestial world. Of course, all of these lunar missions are just a prelude to the return of humans to the Moon in the not-too-distant future," he told BBC News

Dialog Powers Diriya.lk to Place Knowledge at the..