Hospitals in the south of England say they have seen a "real rise in pressure" as the number of Covid patients receiving treatment increases.

Paramedics in London are now receiving almost 8,000 call-outs a day, with Boxing Day described as one of London Ambulance Service's busiest in history.

The service and at least two others have urged people to only call 999 if there is a serious emergency.

But the true scale of cases is likely to be higher as Scotland is not releasing data around deaths between 24 and 28 December, while Northern Ireland is not providing either case or death data over the same period.

There were 21,286 people in hospital with coronavirus across the UK on December 22 - the last day for which data is available - according to official government figures.

Health bosses have said hospital services are now coming under "intense pressure" as the number of coronavirus cases continues to rise in parts of the UK, with the new variant accelerating the spread.

An LAS memo said the rising demand was down to the "rapid spread of the new variant of the Covid-19 virus".

Figures seen by the BBC show at one London hospital on Sunday morning, ambulance crews were typically waiting nearly six hours to hand over patients to staff. One paramedic told the BBC that some patients had been treated in ambulance bays because of a shortage of beds.

"It's been a horrendous time," the paramedic said. "Ambulance staff are finding the whole situation very stressful." 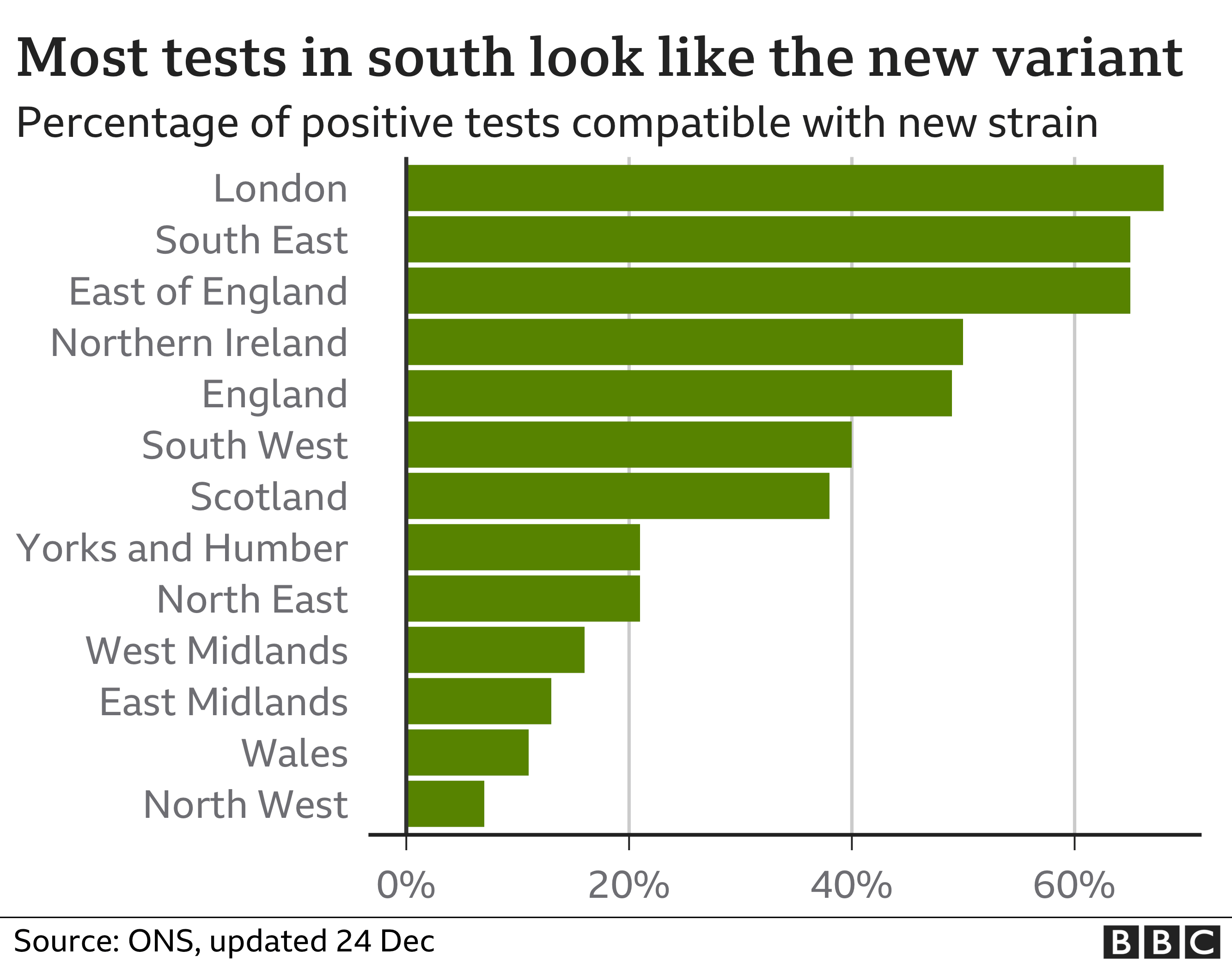 image captionAs of 24 December, London, the South East, and the East of England had the greatest proportion of new variant cases

London Ambulance Service (LAS) said demand had been rising "sharply" in the past weeks, while similar pressures are also being reported in other parts of southern England.

The South Central Ambulance Service - which covers Berkshire, Buckinghamshire, Oxfordshire and Hampshire - asked people only to dial 999 in a "life-threatening or serious emergency". And the South East Coast Ambulance Service - covering Kent, Surrey and Sussex - has asked the public to consider other options before calling 999.

Saffron Cordery, deputy chief executive of NHS Providers, which represents hospital trusts in England, said "many more" people were coming into hospitals with Covid, as well as other conditions.

She said hospitals in London and the south of England were under "real pressure" due to demand from Covid-19 and other conditions, as well as staff absence.

"The public should be under no illusions that this is one of the most challenging times for the NHS," she said.

Doctors have also warned Scotland's health system is "severely stretched", while a Welsh hospital made an urgent appeal for help with Covid-19 patients on Saturday night.

Mainland Scotland entered level four restrictions from Saturday for three weeks, and a similar stay-at-home order is also in place in Wales.

Northern Ireland has also entered a new six-week lockdown. The first-week measures are the toughest yet, with a form of curfew in operation from 20:00 GMT, shops closed from that time and all indoor and outdoor gatherings prohibited until 06:00.

image captionThis chart, using data up to 23 December, shows how hospital admissions had been rising in London

Infection rates in England are currently highest in areas of Essex, London and other parts of the South East.

Parts of Essex have recorded the highest weekly coronavirus case rates since the pandemic began. In the week leading up to 21 December, Brentwood, Epping Forest and Thurrock all had rates of more than 1,350 cases per 100,000 people.

It comes as 24 million people - or 43% of England's population - are now living under the harshest tier four rules after more than six million people in east and south-east England went into the highest level of restrictions on Saturday. The rules include a "stay-at-home" order.

Meanwhile, NHS England said coronavirus vaccinations had been paused on Christmas Day and over the weekend but would resume on Monday.

LPL given green light to go ahead